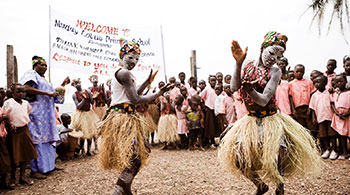 NEW YORK, NY, April 11, 2016 – Angola Capital Investments (ACI), a leading international investment firm headquartered in Angola, made a substantial donation to Shine on Sierra Leone (SOSL) to help improve healthcare in the country. SOSL is a non-profit organization that raises awareness for the needs of Sierra Leone and creates programs to promote self-sufficient communities and rich cultural experiences.

Sierra Leone was greatly affected by the Ebola outbreak that began in 2014. Because of the generous donation of ACI, SOSL was able to initiate an Ebola response program in the Bongema Village. SOSL set up sanitation stations, engaged in door-to-door education and dialogue, and trained 50 Community Health Care Workers (CHWs) in partnership with Dr. Dan Kelly, an infectious disease specialist. The donation also directly supported 67 children who were orphaned by the virus. Since the SOSL program was initiated, there have been no reported cases of Ebola in the village.

“We are very happy our donation could make such a difference to the people effected by Ebola in the Bongema Village” said CEO Zandre Campos. “Our support of Shine on Sierra Leone began because we both want to create sustainable businesses and economies throughout Africa.”

ACI also supports the Shine on Family Support Program, EXCEL. EXCEL trains local social workers and provides educational and psychosocial support services. The program specifically supports orphans and vulnerable children affected by the Ebola virus. Psychosocial support services are provided so that the virus does not define the future of the children who were effected.

ACI invests in many non-profit organizations and companies in the energy, transportation, hospitality, healthcare and real estate sectors.

About Zandre Campos
Zandre de Campos Finda is one of the great, innovative business leaders and global entrepreneurs emerging out of Africa. Currently, he is chairman and CEO of Angola Capital Investments (ACI), an international investment firm headquartered inAngola with holdings throughout Africa and Europe. Prior to founding ACI, Mr. Campos was CEO of Nazaki Oil & Gaz S.A.  He has held the positions of CEO of the mobile phone company Movicel Telecommunications and an executive in the office of the president of SONAIR, S.A., a subsidiary of Sonangol, Angola’s state-owned oil company that oversees oil and gas production.  He began his career as a legal advisor with Sonangol Holdings.

Mr. Campos also sits on the board of Sphera Bluoshen S.A., a subsidiary of Oshen Group and part of Sphera Global Healthcare. Sphera is committed to bringing high-quality healthcare services to nations around the globe with current activities in Angola,Morocco, and Rwanda. Sphera is dedicated to healthcare equality and accessibility. He is also a board member in Bluoshen S.A. and Boost – Communication & Strategy, S.A. and other organizations across the globe. Mr. Campos graduated from Lusiada University, Lisbon, with a degree in Law.